Studying decomposition of organic components is important to improve our knowledge about carbon cycling in ecosystems. Lignin molecules are too large for uptake by plants or animals and need depolymerisation enzymes. In animal feed, white rot fungi are used to unlock the lignin-carbohydrate complex in cell walls and different techniques such as Py-GC/MS have been developed to measure and explain the ruminal digestibility of e.g. 13C-wheat straw (Nayan et al, 2019). Others are interested how plants manipulate decomposition of lignin in order to improve soil N availability (‘microbial N mining’) by adjusting enzyme production (Wild et al, 2019) or how these processes rely on plant/soil-combinations and vegetal productivity (Torres et al, 2014). Environmental conditions strongly affect decomposition rate of substrates in soil. Warmer conditions, resulting from climate change, will probably increase the frequency of wildfires with a resulting net loss of carbon to the atmosphere with a positive feedback to global climate change (Waldrup and Harden, 2008), but finding evidence for these relatively small changes in carbon is strongly masked by large soil carbon pools. Hence, sensitive methods including high-tech GC/MS techniques and stable isotope probing (SIP) have to be used to monitor decomposition of this important carbon substrate (Nayan et al, 2019; Torres et al, 2014).

The use of 13C-lignin enables to distinguish between the decomposition of residues of interest and disturbing background soil carbon pools, it allows to determine the active microorganisms responsible for the job by stable isotope probing (SIP) and the use of sophisticated MS analysing methods.

The measured 13C-lignin decomposition in four soils was not affected by permafrost conditions, but clearly by effects of wildfire on fungal abundance in the soil (Figure 2). 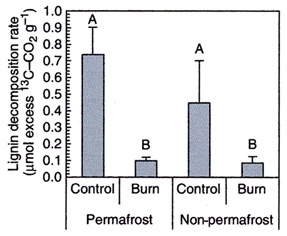 Figure 2. Effects of wildfires on lignin decomposition rate in permafrost and non-permafrost soils.

The authors concluded that the measured lignin decomposition rate – as derived from 13CO2 respiration after 13C-lignin addition – was not affected by permafrost conditions, but clearly by effects of wildfires on fungal abundance in the soil. Torres et al (2014) investigated the role of the microbial community decomposing lignin in degraded soils using SIP and concluded that only a minor part assimilated carbon derived from lignin. This uptake is apparently steered by a complex interaction between C and N available in the soil in which ‘microbial N mining’ possibly plays a crucial role as explained by Wild et al (2019) who reported an unaffected lignin decomposition after N addition to soil whereas carbon addition reduced lignin depolymerisation. Future developments in analysis techniques like Py-GC/MS will probably help to further unravel lignin decomposition processes. This method is a powerful tool allowing for an accurate quantification of lignin content and for studying mechanisms of diﬀerent fungal species in modifying lignin structures (Nayan, et al, 2019).

Torres IF, F Bastida, T Hernández, P Bombach, HH Richnow, C García. 2014.
The role of lignin and cellulose in the carbon-cycling of degraded soils under semiarid climate and their relation to microbial biomass.
Soil Biology and Biochemistry 75: 152-160