One of the problems when investigating the effects of prebiotics like inulin is how to follow the dynamics of its metabolites e.g. in the blood plasma and to distinguish these from other internal or external sources. The use of uniformly labelled 13C-inulin enables tracing of metabolites and linking SCFA production to bacterial species, either in vivo in the bowel or in vitro systems like TIM-2 (TNO gastro-Intestinal Models).

Deroover et al. (2017) demonstrated in healthy volunteers that intake of 13C-inulin resulted in increased SCFA-concentration in plasma for at least 8 hours. These findings were confirmed by Beek et al., 2018). Knowledge about the transformation of inulin into SCFA’s is important, e.g. for understanding how SCFA’s improves fat oxidation in obese men (Beek et al., 2018) and how one of these fatty acids, acetate, plays an important in the central appetite regulation (Frost et al., 2014).

The active microbial species involved in the fermentation process of inulin can be identified by extracting and analyzing 13C-RNA from faeces. This method, called RNA-stable isotope probing (RNA-SIP), has been successfully used in vitro with 13C-labelled potato starch (Kovatcheva et al. 2009) and in vivo in the study by Tannock et al. (2014). During the latter study, rats were fed with a diet containing IsoLife‘s uniformly labelled 13C-Inulin. Several hours after administration, RNA extracted from cecal samples and centrifuged over a density gradient to separate 12C-RNA from 13C-enriched RNA. Most of the RNA obtained was present in the heavier fractions, indicating an active population of 13C–Inulin consumers. It was shown that Bacteroides uniformis was able to directly use inulin as a carbon source (trophic level 1), whereas Blautia glucerasea, Clostridium indolis, and Bifidobacterium animalis fermented the fructo-oligosaccharides derived from inulin degradation (trophic level 2) (Figure 1). 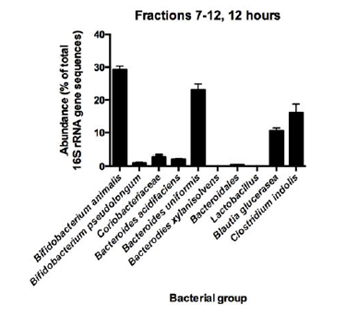