The chemical structure of plant cell walls is a complex matrix of lignin and hemicellulose that supports the cellulose fibre bundles. The close interaction between these structural elements of cell walls makes biological degradation difficult. It is important to unravel the plant cell wall structure and its capability to resist enzymatic degradation to improve conversion technologies for biofuel production (Ragauskas et al, 2006).

Cellulose is a polysaccharide consisting of a linear chain of β(1→4)-linked D-glucose units packed in both crystalline and amorphous structures in the cell wall. Hemicellulose also occurs in most cell walls and contains branched polymers such as arabinoxylans. Lignin, a complex, highly heterogeneous aromatic polymer composed of hydroxycinnamyl monomers with various degrees of methoxylation, is the third important cell wall constituent. The close interaction between the three polymers determines the resistence to enzymatic degradation. A common method to reduce this resistence is a thermochemical pretreatment, an acid hydrolysis at 180 oC that removes hemicellulose, disrupts the lignin structure, and enhances degradation of cellulose (Kumar et al, 2009). Solid-state NMR spin diffusion (13C CP/MAS and SELDOM) is a particularly useful tool to determine the changes by this pretreatment by measuring inter- and intramacromolecular distances of cell tissues, i.c. 13C labelled corn stover obtained from IsoLife (Foston et al, 2012a).

Figure 1 shows the normal CP spectrum of 13C-labelled corn stover in a plot along with SELDOM spin diffusion spectra of increasing Tm (mixing time). As the mixing time increases, magnetization is transferred to other groups in the lignin and then to, presumably, hemicellulose and subsequently to cellulose based on the rapid appearance of the acetyl-related methyl peak at ∼21 ppm. Figure 2 shows the same spectra for 13C-labelled corn stover, pretreated at 180 °C in 1.2% H2SO4. The spectra indicate that significant magnetization transfer between the lignin and the cellulose does not occur, even at the longest mixing time. One explanation is the extraction of hemicellulose by acid hydrolysis removed the major physical connection between lignin and cellulose (Foston et al, 2012a). 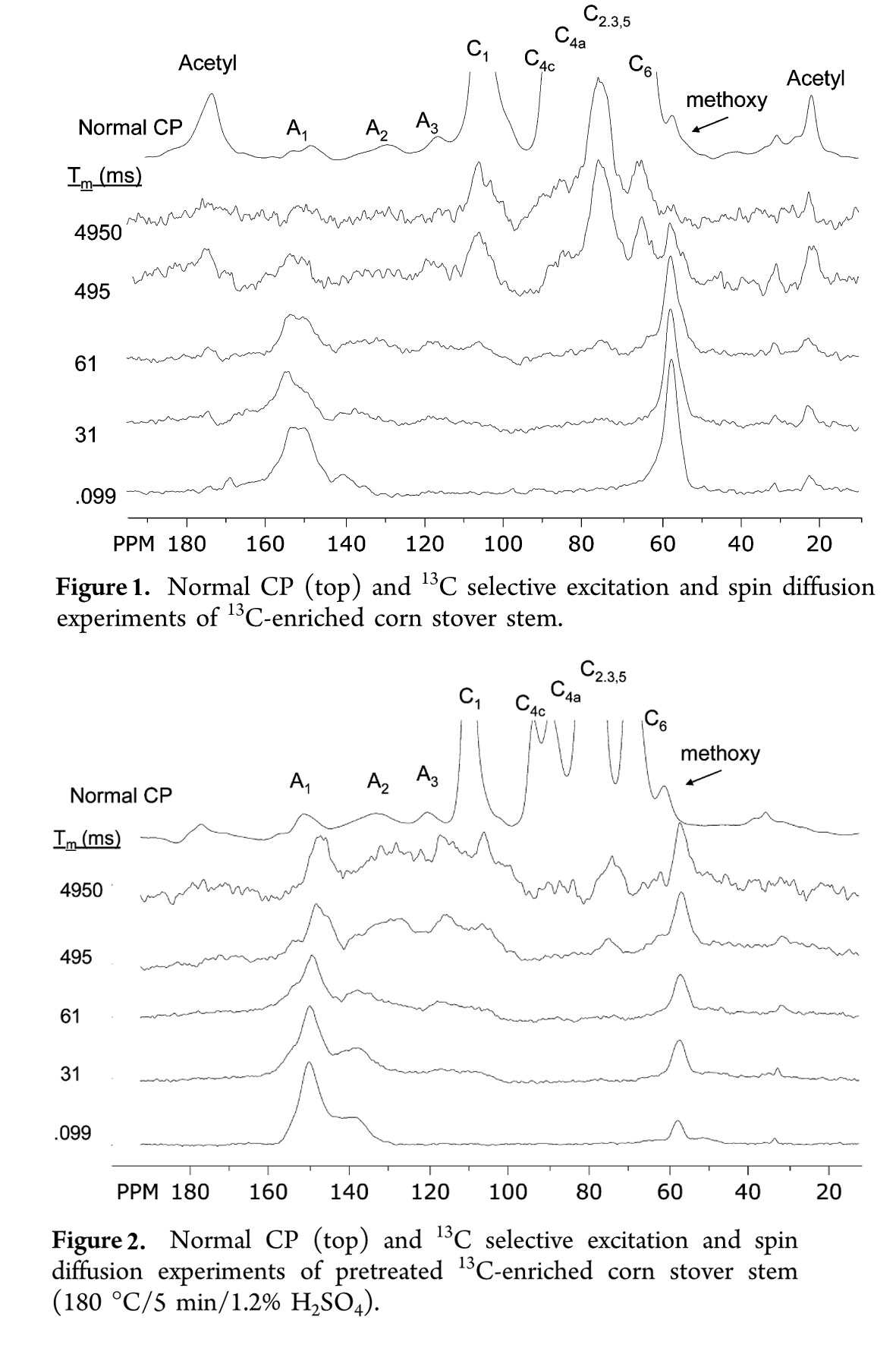 The authors conclude that the results suggest that lignin is in close contact with both hemicellulose and cellulose. The 13C CP SELDOM spin diffusion measurements on the pretreated 13C corn stover did not indicate that significant magnetization transfer between the lignin and the cellulose occured even at the longest mixing time. This seems to confirm that hemicellulose, which was removed in the pretreated sample by acid hydrolysis, lies at the interface between lignin and cellulose. The authors believe that a major mechanisms of pretreatment – the removal of the hemicellulose layer -, disrupts the hemicellulose−lignin matrix in the plant cell wall, thus reducing the resistence against enzymatic degradation of cellulose (Foston et al, 2012a).

In their next publication, Foston et al. (2012b) used 13C ionic liquid NMR to accurately and rapidly measure plant cell wall composition. The 13C spectral S/N ratio obtained for natural abundant corn stover (Figure 3) was about one-fourth that of the13C enriched corn stover, yet requiring a 216 times longer data acquisition period. Even at long acquisition time, the spectrum of the natural abundant corn stover lacks the detail for analyzing any significant cell wall chemistry and is dominated by solvent peaks. 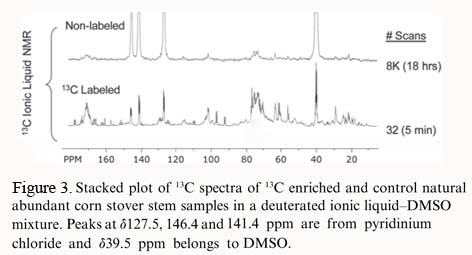