Environmental conditions such as frost, fire, and water availability strongly affect the activity of soil microorganisms and soil carbon cycling in ecosystems. Seasonal freezing or burning events affect microbial activity substantially although the consequences for the soil carbon flow and the microbial community are often unclear. Although microorganisms can assimilate small carbon compounds present in frozen soils, soil organic matter (SOM) is dominated by large polymeric C molecules that require exoenzymatic breakdown before they can be used as substrate by micro-organisms. Many fungal taxa have the ability to produce exocellulases and accumulate cellulose-derived C in their biomass in high quantities (Vĕtrovský et al, 2016), but what is the capacity under extreme circumstances?

The use of stable isotopes helps to clarify the contribution of polymers such as cellulose to the total soil respiration or soil carbon storage in complex ecosystems containing a large background of 12C-polymers, as well as to identify the microbial species or genera involved in C-cycling processes.

The effect of frost on mineralisation of cellulose was investigated by Segura et al (2017). Using 13C Heteronuclear Single Quantum Coherence NMR spectroscopy, they showed that atoms originating from U-13C Cellulose had been incorporated into cell membrane lipids (Figure 1). 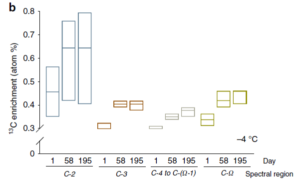 Bastias et al (2009) have used 13C-cellulose to study the effects of prescribed burning of forests since 1972 on the occurrence of cellulose decomposers. The DGGE showed that all 12C- and 13C-fractions in the unburned plots had complex profiles, but in the 2-yr-burn plots the 13C-fraction contained only a few discrete bands (Figure 2a, b).

The small number of bands in the DDGE-profiles for the 13C fractions reveal that fewer active fungi incorporated 13C from the labelled cellulose. Some fungi that were able to use the 13C-cellulose were identified as Cryptococcus podzolicus, Crypotococcus humicolus, and Metarhizium anisopliae. Repeated burning apparently significantly altered the soil fungal community.

López-Mondéjar et al (2018) investigated the food web of cellulose decomposers in forest soil showing that this network has a high level of recycling of microbial products, rather than hierarchical structures that maintain a unidirectional carbon flow through the web. In contrast to current knowledge, they showed that both fungi ánd bacteria were involved in mineralisation of complex carbon sources (Figure 3), confirming an observation by Štursová et al (2012), although cellulose decomposition was 10 times faster in the fungi‐dominated litter. Taubert et al (2019) showed that the occurrence of groundwater selects the soil microbes involved in decomposition of plant polymers. Using stable isotope probing, they found a complete different set of microbial species responsible for degrading cellulose in groundwater than in soil.