Decomposition pathways of plant residues, with their intermediate products and the organisms involved, are often poorly unravelled. Where the gross decomposition process can be monitored using isotopes and the organisms involved can be studied with RNA-SIP, structural transformations can now be followed using semi-solid High Resolution Magic Angle Spinning NMR spectroscopy (HR-MAS NMR spectroscopy). This technique has been applied for several years e.g. to identify structures of plant polymers (Fang et al, 2001). NMR-techniques are often considered as rather insensitive because of the low natural abundance of 13C and 15N. Labelling with these stable isotopes helps to solve this problem.

Enriching plants with 13C and 15N during their growth strongly improves the sensitivity of NMR-techniques (Kelleher et al, 2006). The authors labelled Lodgepole pine (Pinus contorta) and Western wheat grass (Agropyron smithii) from seed during two months with both 13C and 15N and subsequently, decomposition was followed while the plant materials were in contact with soil. Transformation of the labelled phytochemical components could be monitored for 12 months with HR-MAS NMR.

Figure 1 shows the 1-D 13C HR-MAS NMR spectra of two different plant materials at two stages of decomposition. By weighing the remaining plant residues after 12 months, calculations indicated that about 80% would have been decomposed. 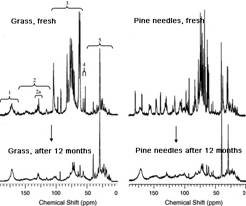 The authors concluded that despite large differences between the initial, fresh, plant residues, the recalcitrant fractions after 12 months seem very similar. They predict a great future for HR-MAS NMR as an analytical tool in studying soil carbon and nitrogen cycling in relation to socially relevant phenomena like climate change effects on soil carbon sequestration.