Quantification and quality control of metabolite concentrations such as lycopene, quinic acid, lutein, quercetin etc. in plant cells is often laborious and inefficient. Reproduction of the obtained results is often hampered by (unintended) variations in sample preparation and sample analyses. Especially, concentrations of unstable metabolites are strongly affected by sample preparation and thus to variations resulting from personal practice and laboratorial protocols. Comparison of results obtained at different places (laboratory variations, apparatus variation) or at different times (run-to-run variations, operator variations) is therefore often tricky or even impossible. Other disadvatages are time consumption (GC) or lower sensitivity (HPLC/UV).

Many of these difficulties can be tackled by the stable isotope dilution technique (Wu et al, 2005, Erk et al, 2009). Uniformly stable isotope labelled analogues of the metabolites – with almost equal chemical properties – are used as internal standards (IS) in the MS analysis. Degradation of metabolites during the analyses and differences between samples due to variations in sample processing by different technicians or protocols are accounted for by using uniformly 13C-labelled internal standards. These internal standards are derived from plant species that have been cultivated in a comparable way as the metabolites in the plant species to be quantified. In tiny amounts (e.g. 10 ng quinic acid per sample), they provide a means for advanced quality control, to reduce sample preparations, to avoid coelution of quinic acid with other organic acids, and to overcome matrix and ionozation effects (Erk et al, 2009).

Cultures of Saccharomyces cerevisiae were grown in a fermentor with U13C-glucose as the only carbon source. Labelled extracts were used to analyse intermediates in the glycolytic and tricarboxylic acid cycles. Figure 1 illustrates for one of the intermediates that the use of uniformly13C-labelled metabolites strongly reduces the variation in the results compared with 12C-based calibration tests (Wu et al, 2004). 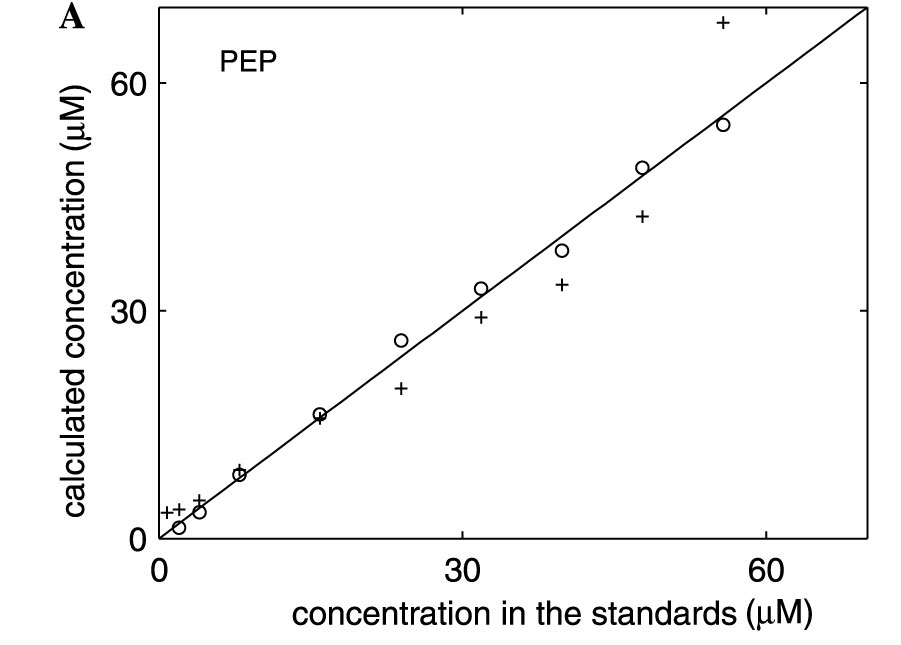 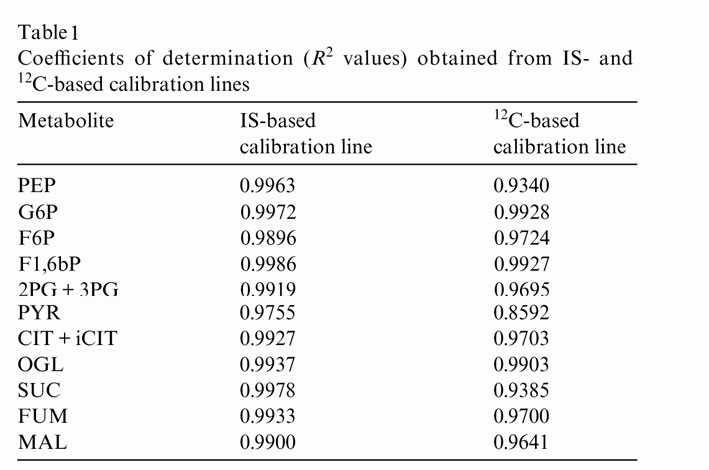 The method using uniformly 13C-labelled extracts is less laborious, more robust and results in a more precise analysis of the metabolome. The authors thus concluded that “IDMS with labelled extracts as internal standards enables a robust quantification of intracellular metabolite concentrations with high precision and holds great potential for future metabolomics research” (Wu et al, 2005). Erk et al. (2009) concluded that they “established a new sensitive and selective SIDA method” and that the internal standard they used, i.c. 13C-quinic acid, “can be used for the routine quantification of quinic acid in various foods”. An example of this latter statement is given by Hagl et al. (2011)