Microbial species each have specific functions in ecosystems, e.g. in nutrient cycling. Identification of micro-organisms is often difficult because only a minority of the species within the system will grow on artificial media. DNA-techniques help to overcome this problem and to extend our knowledge on species diversity because non-culturable, often new species are also detected. However, both techniques still have a major disadvantage: they cannot distinguish between active and dormant organisms, i.e. they do not tell which species are functionally active in specific processes. Stable isotopes like 13C and 15N help to tackle this problem.

To identify organisms involved in specific processes, their favourite substrate is supplied labelled with a stable isotope. For instance, 13C-labelled components like cellulose, lignin, or even whole leaves or roots, etc. amended to (natural) growth media (like soil) can be used as substrate. Micro-organisms actively growing on this substrate will multiply and produce intra- and extracellular end products.

After amending soil with 13C-labelled cellulose and incubation under oxic or anoxic conditions, 13C RNA produced by cellulose utilising species can be separated from the 12C RNA originating from species unable to utilize cellulose. After RNA extraction from soil, the newly formed (‘heavy’) 13C RNA can be separated from the (‘light’) 12C RNA by density-gradient centrifugation. The 13C RNA can then be further processed and identified by comparing their sequences with existing databases and subsequently linked to the active microbial groups or species. This method is called Stable Isotope Probing (SIP). 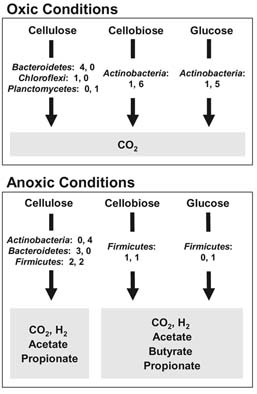 Thanks to the application of 13C-labelled cellulose as a substrate, Schellenberger et al. (2010) demonstrated that under oxic conditions, cellulose was degraded by different bacterial groups than under anoxic conditions. Moreover, their findings showed that a large number of bacterial groups involved in the utilization of cellulose did not closely affiliate to known families.

The same principle as shown in the example above applies to other complex 13C-labelled substrates like hemi-cellulose, lignin or even whole plant parts. Application of stable isotope probing (DNA-SIP or RNA-SIP) in ecology or nutrition has a large potential to link specific micro-organisms to metabolic and ecosystem processes.