Regular burning as a forest management tool to improve short-term benefits may strongly affect below-ground micro-organisms and soil carbon cycling in ecosystems. Although analysis of soil microbial communities by direct soil DNA extraction from the treated forest plots and subsequent DGGE demonstrated that basidiomycete communities altered significantly (Bastias et al, 2006), no information is obtained about the fungal species involved and about the functional significance of these changes. This requires knowledge about how major functional groups like cellulose decomposers are affected. However, identification of the relevant members of these groups is not easy and only recently feasible (Bastias, 2009).

Stable Isotope Probing offers a more direct means to identify cellulolytic fungi than cultivation-based methods. Furthermore, RNA-SIP seems a more sensitive method then DNA-SIP because of the higher rates of RNA-synthesis (Manefield et al, 2002). Bastias et al (2009) has used 13C-cellulose (IsoLife BV) to study the effects of prescribed burning of forests on the occurrence of cellulose decomposers. The authors have added 13C-cellulose to soils of forests plots with a prescribed biennial burning since 1972 and compared these plots with unburned plots. The soils were incubated for more than a month and subsequently RNA-SIP was applied followed by DGGE to determine the effect of burning on cellulolytic fungi to be identified by the incorporation of 13C. DGGE bands were subsequently analyzed with Canonical Analysis of Principle coordinates (CAP). The sequences of several DGGE-bands were obtained and analysed with FastA, a program that compared the input DNA sequence to all of the sequences in the EMBL-database and reported the best matched sequences.

The DGGE showed that all 12C and 13C fractions in the unburned plots had complex profiles (Figure 1a), but in the 2-yr-burn plots the 13C-fraction contained only 5 discrete bands (Figure 1b).

Ordination by CAP indicated that DGGE profiles for both 12C and 13C fractions from the 2-yr burn plot differed significantly (P=0.04) from those of the unburned plot (Figure 2). 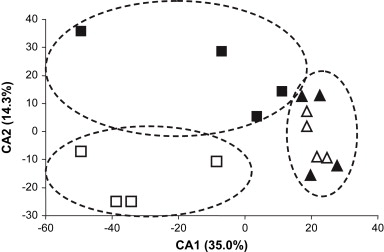 Sequencing some of the DGGE-bands and analysis with FastA yielded several matches (Table 1).

The fewer bands in the DDGE-profiles for the 13C fractions suggest that fewer active fungi incorporated 13C from the labelled cellulose and indicate a reduced diversity of cellulolytic soil fungi. Some fungi that were able to use the 13C-cellulose or its 13C-degradation products were identified as Cryptococcus podzolicus, Crypotococcus humicolus and Metarhizium anisopliae. Bastias et al (2009) therefore concluded that repeated burning since 1972 significantly altered the soil fungal community. This conclusion is in line with Waldrop and Harden’s (2008) conclusion that wildfires affect fungal abundance and subsequent lignin decomposition rates.